Perfect Towns for Biking Around History, Culture, and Food.

Kagawa Prefecture includes a diverse array of interesting sites, such as island art, the Seto Bridge, Zentsuji Temple, and Kotohira-gu, all located close together. The area has recently become known as “Udon Prefecture” and there are quite a few tourists who come to try different types of udon. The popular udon shops are scattered around the whole prefecture, from towns to fields, and each one has special flavors and ways to eat the udon so that it’s quite fun to compare the differences. Bikes are perfect for exploring the udon shops or seeing the sites of Kagawa Prefecture. On a side note, many of the udon shops are open from early in the morning and we recommend morning udon in place of your morning meal.

A huge sand drawing of the Kan’ei Tsuho coin, which was circulated in the Edo era. It is 122m from east to west, 90m from north to south and 345m in circumference. It is said that people who see the coin-shaped sand drawing will live a long and healthy life and will not have any money troubles. The view from the observation point in the summit, which you can get to by bike, is superb and you can also see the beautiful sea. It is sometimes lit up depending on the season and the time. 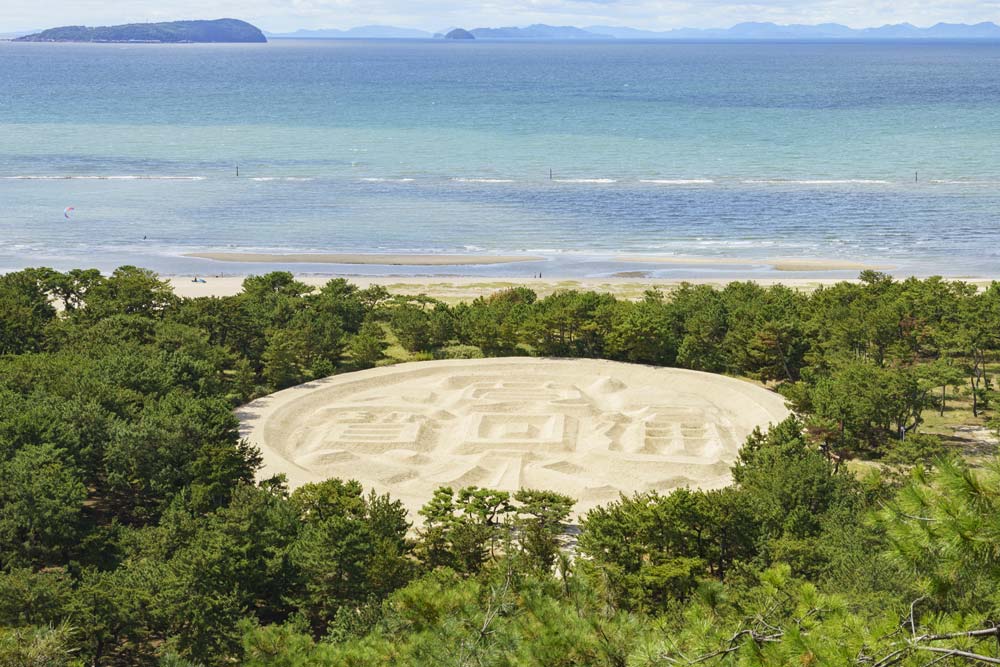 It is also known by the nickname, Konpira-san. There are 785 stone steps from the entrance of the approach to the main shrine and 1,368 steps to the rear shrine. The stone-stepped approach to the shrine is lined with shops and crowded with tourists. Walking sticks can be rented from shops in the area. We recommend climbing up slowly, enjoying eating and shopping along the way. 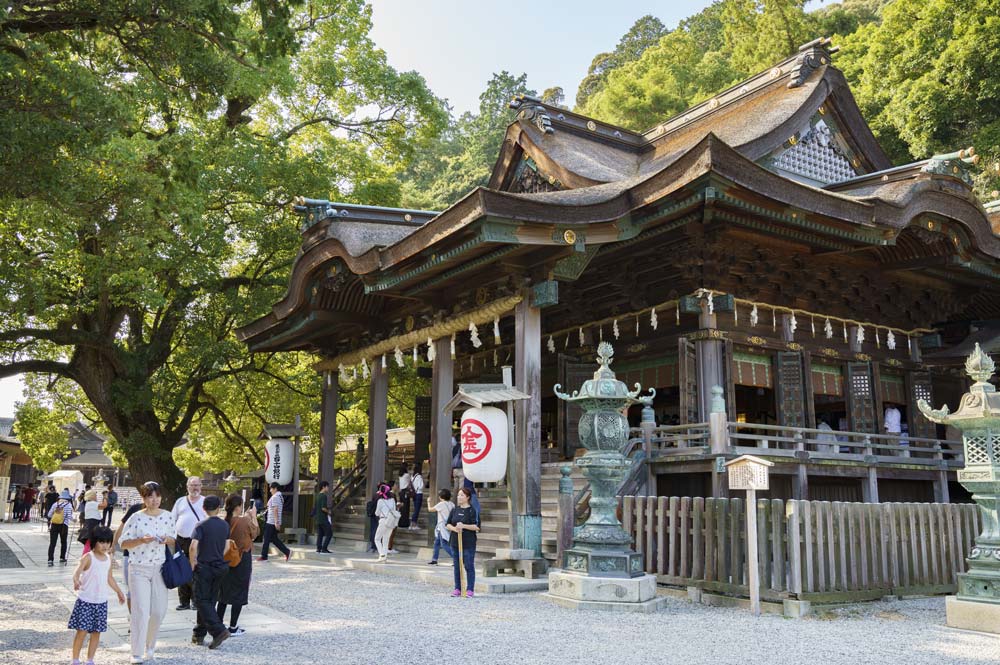 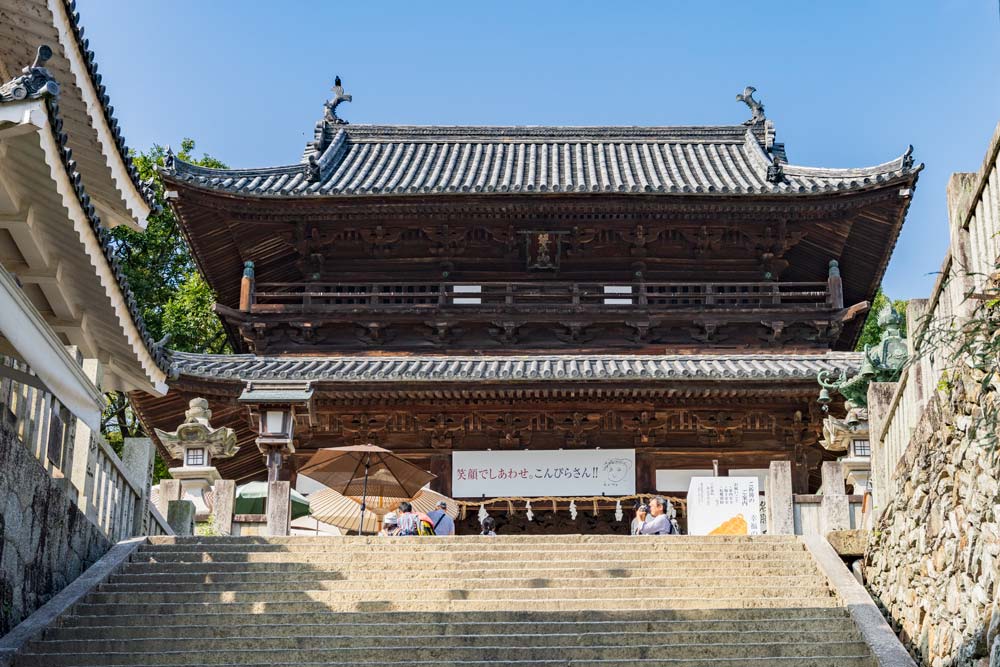 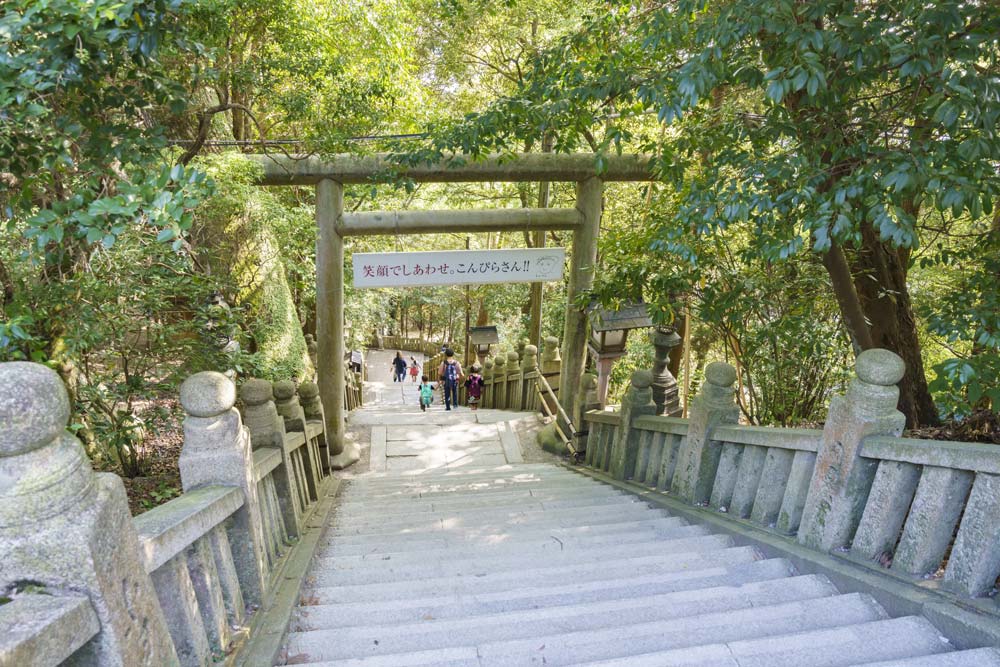 Zentsuji Temple is the birthplace of Kobo Daishi and is the best spot to experience the pilgrimage atmosphere that is unique to Shikoku. One ascetic practice designed to make you reassess yourself and be reborn into a new you is the Kaidan-Meguri in the Founder’s Hall where you walk in complete darkness while touching the wall. Use this opportunity as a shortcut to the pilgrim travel experience. This route is also interesting for its old-style streets, redolent of the Meiji and Taisho spirit, which spread out alongside the road up to Zentsuji Temple. 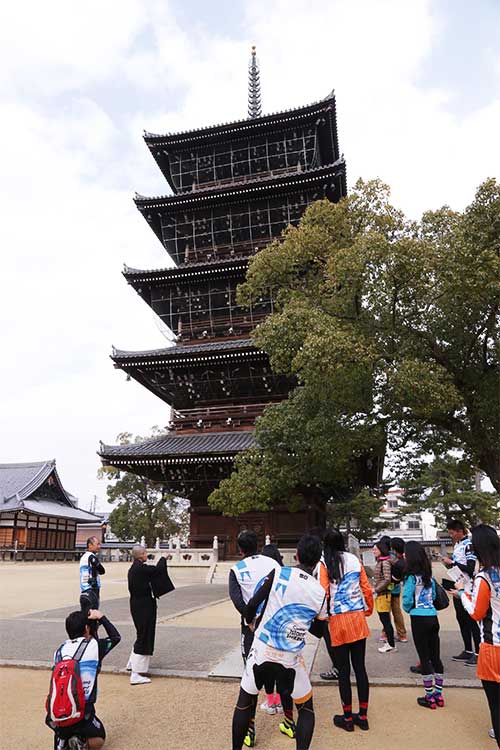 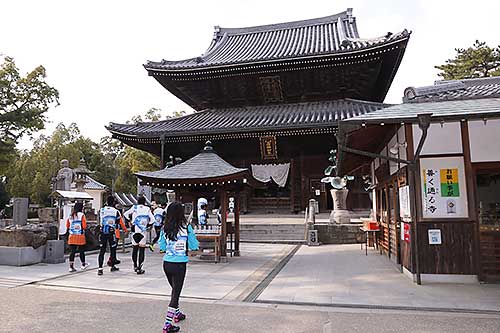 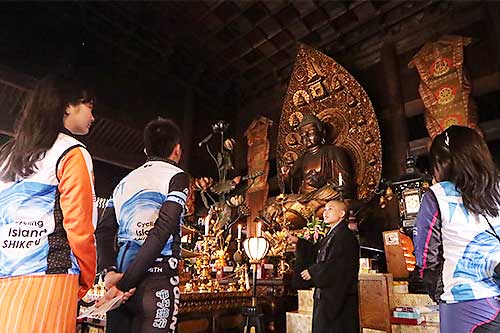 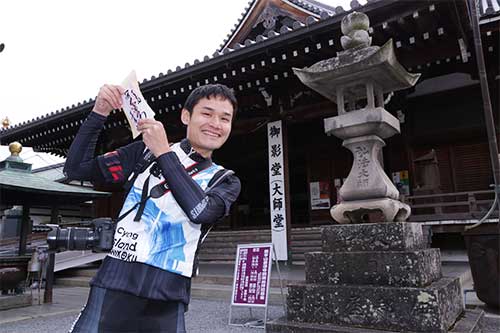 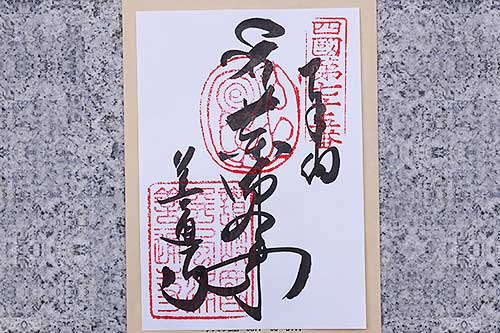 Marugame Castle is a symbolic presence in Marugame with a 400-year history. You can see its grand stature from the base. It is the stone wall that is famous. It is even called ‘the famous castle of the stone wall’, the highest in Japan. There are a number of different types of wall construction and the wall on the way to the keep has beautiful lines and is called the “fan incline”. 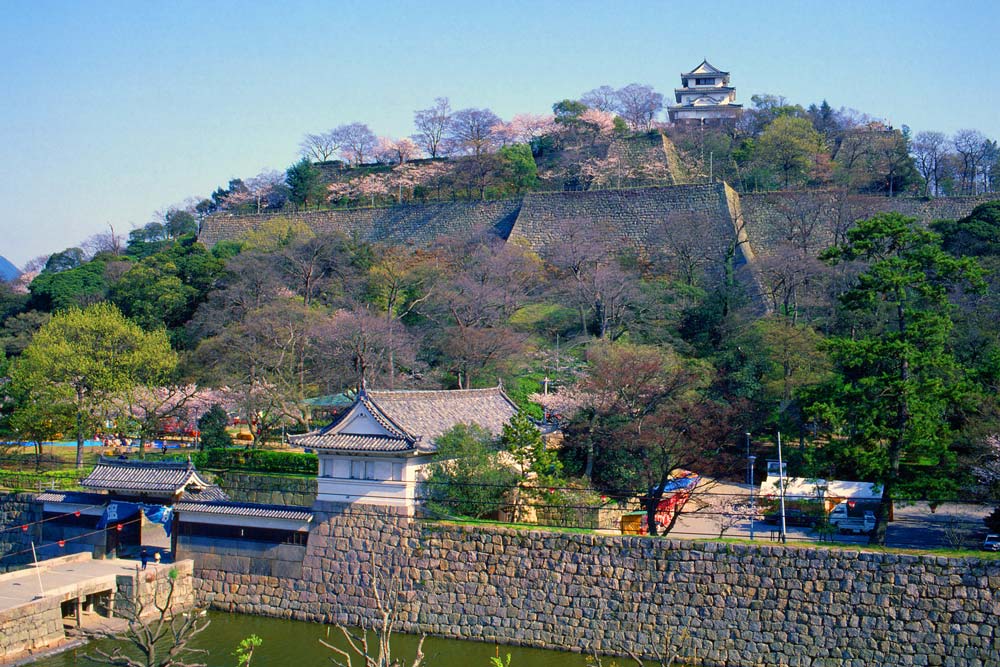 This route extends from Funatama Shrine in Sakaide City to the Nose Overlook in Osaki and is a refreshing course for cycling along the coastline while viewing the Seto Bridge. From the tip of Goshikidai, or the “nose” of Osaki, you can enjoy the beauty of the many islands unique to the Seto Inland Sea and the view of the setting sun is as beautiful as a painting. Since there are surprisingly few areas from which one can enjoy the view of the sun setting in the Seto Inland Sea, we recommend biking towards a Seto Inland Sea sunset spot. 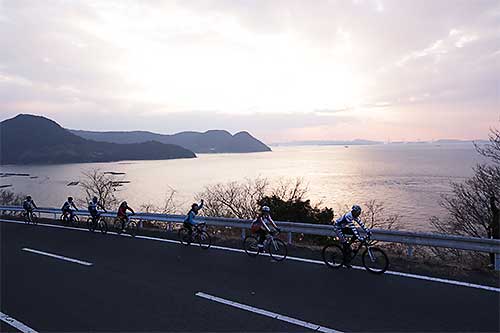 Ride along the coastline while looking out at the Seto Bridge 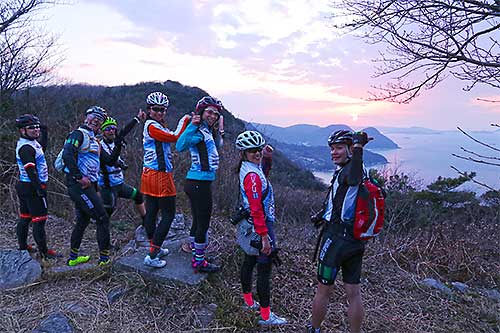 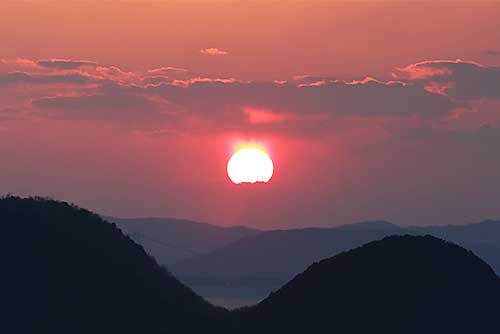 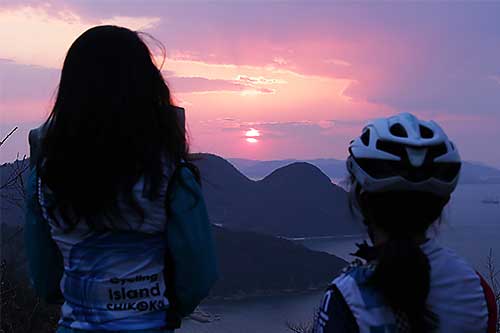 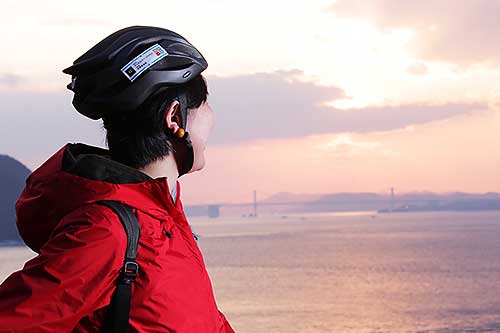 Takamatsu Castle is located very close to the sea and is counted as one of the three castles on the sea in Japan. The moat draws in sea water and, surprisingly, sea bream is cultivated in it. With the spirit of realizing a great ambition (taigan joju), you can feed the fish. The name Tamamo was written as Tamamo Yoshi as a customary epithet for Sanuki by Kakinomoto no Hitomaro in the Man’yoshu anthology of poetry and the sea in the surrounding area was called Tamamo no Ura, which is where the name came from. 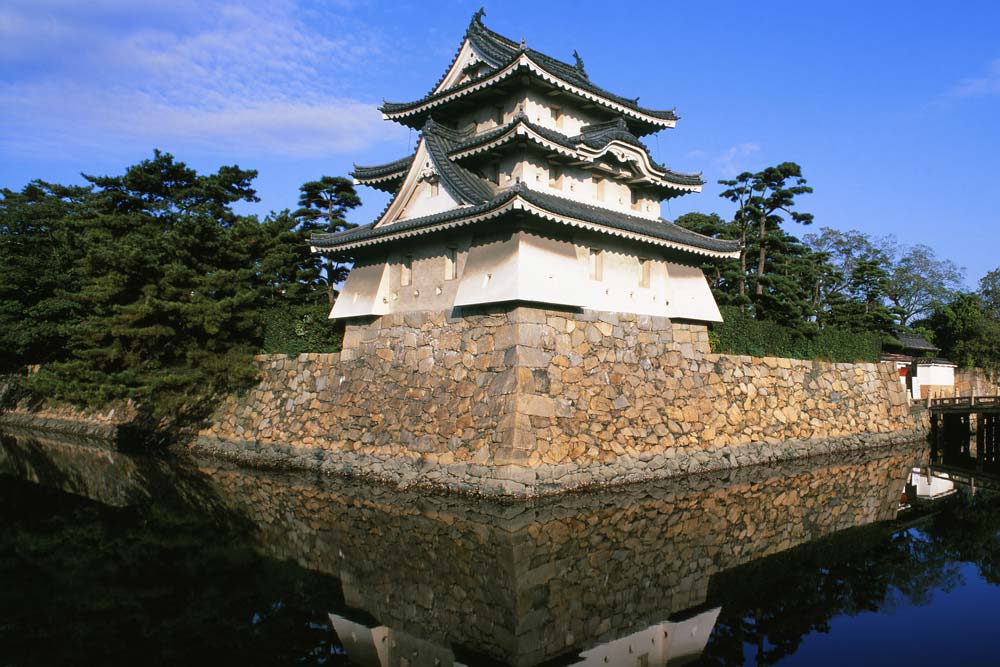 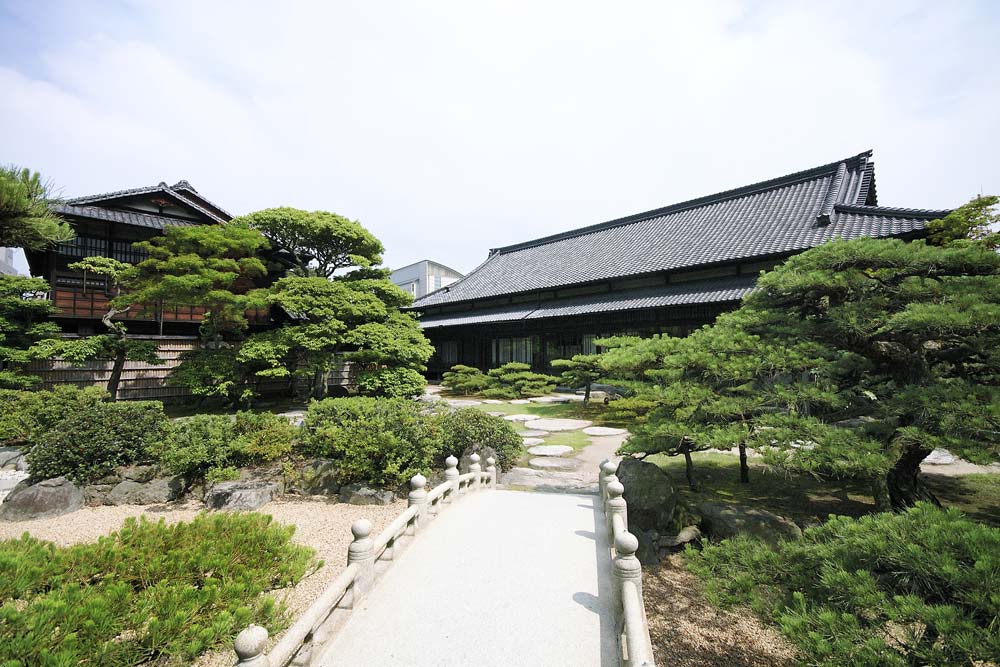 A residence renovated from a merchant house that made sake and soy sauce in Higashi Kagawa City that had been in business since the Edo era. The original décor such as Japanese-style rooms and the garden remains and visitors can enjoy the traditional beauty of Japan. There are even shops in the storehouses where visitors can enjoy eating and shopping. After enjoying the residence, it’s a nice idea to take a gentle stroll around the retro townscape. 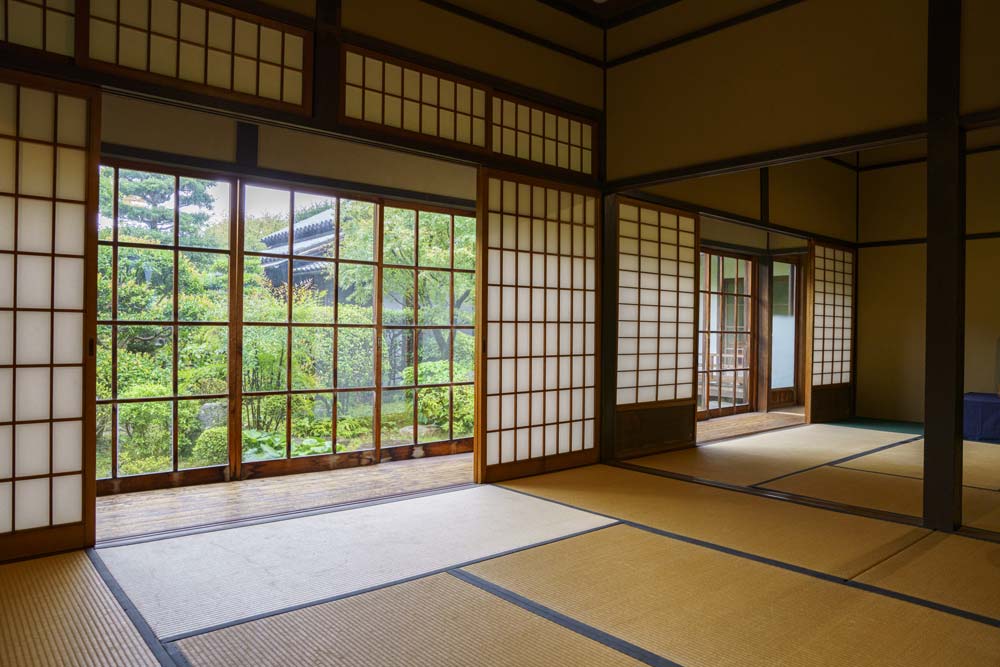 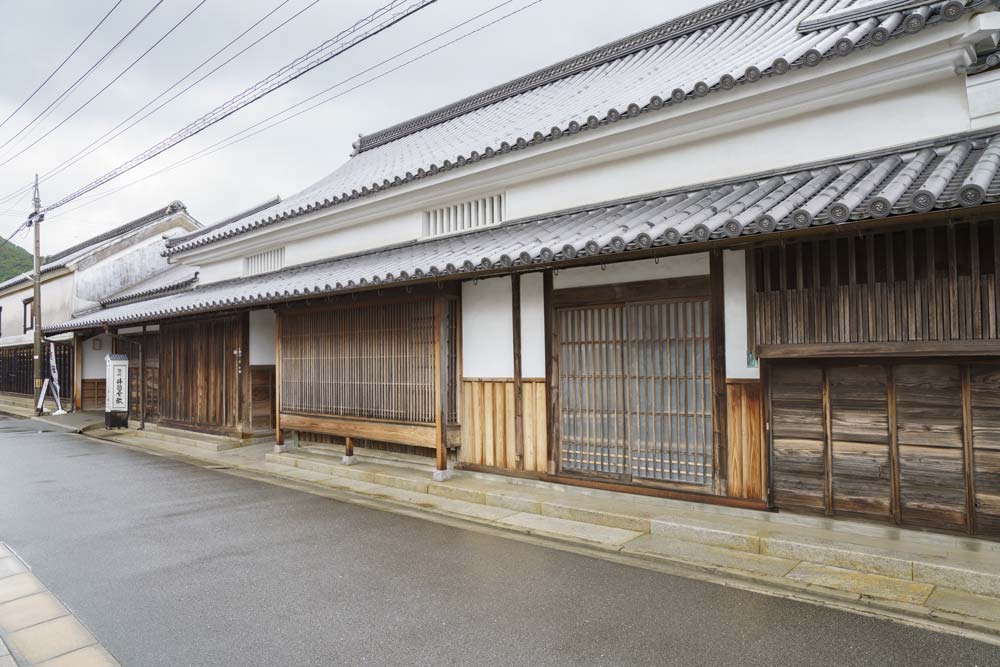 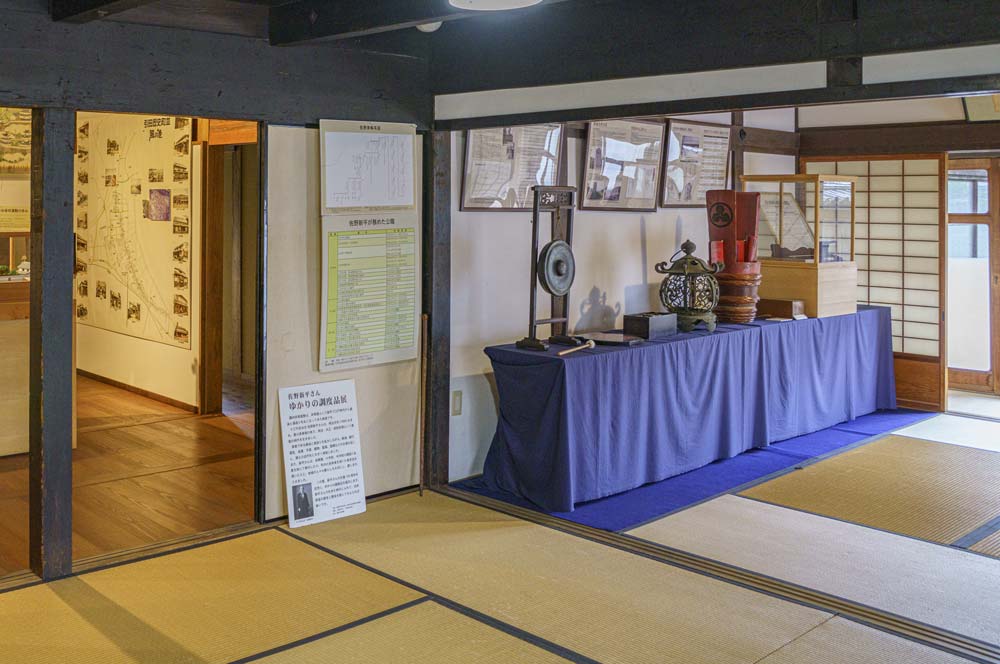